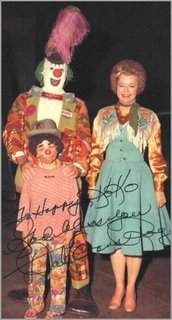 
I was saddened last night to read CircusVern report that Dave "Happy" Twomey passed away September 28th at approximately 3:30 PM with his son, Ken Twomey, at his bedside.

"Happy" was known for 50+ years performing on the West Coast, mainly in California at fairs with his Happytime Circus. His wife Judy preceded him in death on July 4, 2000.

Twomey had been admitted to a hospital in Santa Paula, California the preceding Friday after suffering a massive heart attack while having lunch at a Chinese restaurant but family were not immediately notified because Dave didn't have a contact name in his identification.

His brother Rick was used to chatting on the phone with Dave several times a week and had been unable to reach him. it wasn't until Monday that Rick drove to Twomey's apartment and found that he wasn't there so he started calling and discovered Dave in the Santa Paula Hospital on life support.

Dave had been ill for more than 10 years with cancer (and had several cancer surgeries). He was on kidney dialysis for a number of years and had also had several strokes and heart attacks, which curtailed his ability to perform as well as limiting his personal activities.

Other than a tour in the Army, Dave Twomey had always been "Happy the Clown".

He made his debut as "Happy " as a youngster performing with the Big John Strong Circus. During Dave's Army days, he was stationed in France. He found several other G.I.'s who had circus backgrounds and put together a small street circus (no animals, seats or tent), and the group spent their off time entertaining the French children.

In the 1960s, he organized his "Happytime Circus", playing mainly fairs in a small top, which held about 500 people.

Dave and Judy Twomey have two sons and a grandson, and the couple had been married 41 years at the time of Judy's passing.

Dave was also a great fan of the B-movie westerns and during numerous conventions and such he crossed paths with many of his favorite cowboy heroes and heroines. Some of those folks even did "guest" appearances with Dave as shown in the photos above.

Kenny is an excellent clown. As was his father. - BJ, CM Circus

Thank you Dave, and famly for years of fun at the Sonoma county fair Your friend Richard Metz Placerville CA