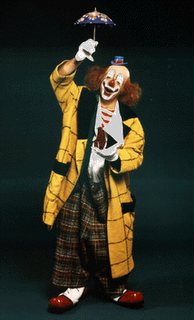 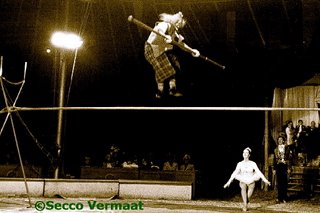 Here is someone whose photo I've seen in international circus books my whole life, but had never seen in action until last night.

Variations on Walter Galetti's likeness are used on European circus posters as often as Lou Jacobs' likeness is used here in the States and last night I finally had the chance to see his comedy wire walking act done on Cirque Bouglione in the mid-sixties.
Excellent stuff!

If I had to compare it to anything I would say that it's kind of like watching Linon's wire walking act (available State-side in the film Billy Rose's JUMBO where he doubles for Jimmy Durante) performed by one of the Rastelli augustes, but that is a gross oversimplification.

I couldn't find any substantial bio info on Herr Galetti (who is still working today, well into his 70s) but I did find that he has written an autobiography which is available on his website: http://clown-galetti.com/1280/nav_d.html .

Here is the blurb for his book, badly translated from German to English by Alta-Vista Babel Fish...

Into clown goes around the world. Five decades now already tollt it as Farbtupfer by the grey tones of the everyday life. With twenty years everything began, several times it with its home of one's own on wheels around the whole world drove. Accompanied of his Mrs. Maria, the two daughters Carmen and Mariza as well as its son Marco. It drove on bad roads, by deserts, to always become with night, fog and snow, with the goal before eyes, of one of the completely large clowns. Why it accepts so many strains, where the pain border is when bearing the many different kinds of public. Does merry make how sad its? The folds in the face nearly 75 year are laughter and no concern folds, although it had to endure many setbacks. The small man with the large heart schwelgt smiling in memories of its adventures, high points and successes. It thanks its creator that it put a glad nature to it into the cradle. Its eyes shine, if it tells of its future. He would like to work further with Spontanitaet close on humans and simply only laughs to make.
Posted by Pat Cashin at 9/29/2006 10:07:00 AM

He's not only an excellent clown, but a very good wire-walker too. I have his act on tape, taken from an Italian series of clown performances which turns up dubbed into various languages when you're least expecting it! You get to see the man as well as the clown. Maybe one day I shall be booked to attend a CFA Convention, and I shall bring my video or DVD to show.
Hmm! Sarasota next year, I believe!

Dear Mr. Spamalot,
"Does merry make how sad its? . . . close on humans and simply only laughs to make." I dunno but that just might be brilliant. I know when I'm close on humans . . .