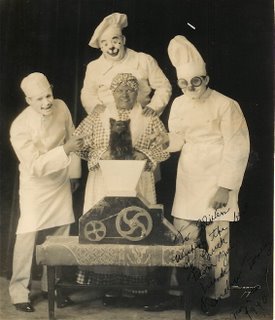 A nod to the Grand Guignol for Halloween...

Here is a photo of the Randow family (presumably before Gene Randow switched to tramp makeup and set out on his own) inscribed to Slivers Johnson. My guess is that Gene is the whiteface on the right.

It looks to be a variation on Joseph Grimaldi's Sausage Machine but why in the world would you four people to do a quick gag like that and just how does the stereotypical "Mammy" character figure in?

Is she Mrs. Butterworth? Does she bring syrup for the sausages?

I've seen Shrine clowns do this gag and bring kids to tears with worry about the dog. I just don't see a way to do this for kids today without the clowns seeming inhumanly cruel but I'm sure that the Randows were rocking 'em with it back in the day.

Duane Thorpe did this old gag on Ringling in the mid 70's. I seem to remember this routine being mentioned at Clown College when we were being taught those classic clown gags like the Dentist & Washerwoman etc.

This was an act, called Aunt Jemima & the Pancakes, Aunt Jemima being Gene Randow Sr. The only other time I've seen anything on it is a full page ad in the 1934, 40th anniversary issue of The Billboard.
Dime once told me that he put Gene's first Tramp make up on for him, since I witnessed a lifelong friendship between them,(like brothers), I have no reason to doubt him.

For at least 100 years, from the 1840s to the 1940s, blackface was a major feature of American comedy. Many (most?) of the old vaudeville, radio, and movie comedians we now revere did blackface. I believe the movie, HOLIDAY INN, with "White Christmas," originally included a blackface section, now deleted, and the Marx Brothers usually had an "ethnic" (i.e., blackface) number. Thanks to habit and racism, putting on blackface was an easy way to get laughs.