Photos of clowns and showgirls are among the most successful promotional tools a circus can use. An appealing, professional clown shows that the circus is a quality production with funny clowns to delight the kids while the beautiful, sexy, young showgirl is empowering for women while acting as eye candy for Dads. Something for everyone = ticket sales.

What follows is this... 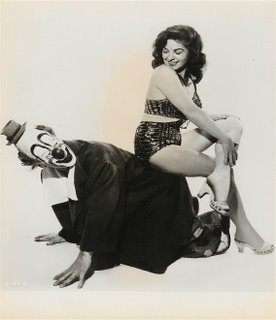 Lou Jacobs, one of the greatest circus clowns of all time, with a beautiful showgirl seated on his lower back.

Weird, but not weird enough.

I think that the exchanged glance makes the photo unnecessarily suggestive.

Let's see if we can't take that out but still weird this up a little more... 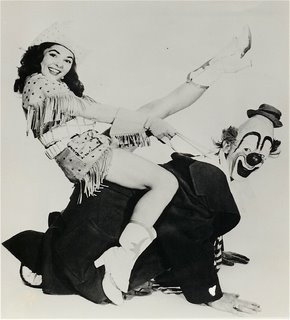 Let's change the showgirl's costume and make her a cowgirl riding on the back of the clown.

Not openly suggestive as in the first picture, more playful but in a weirder sort of way.

This photo is pretty weird but I bet we can kick it up a notch and REALLY take this into a whole new realm of weird! 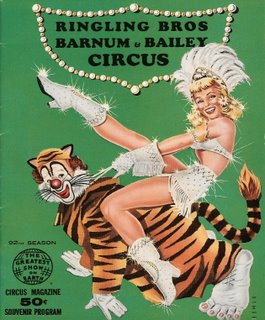 The beautiful showgirl is no longer a cowgirl but is now a blonde. Why? I don't know.

Lou Jacobs is now dressed as a tiger. Why? I can't even begin to imagine.


John Ringlin North made a few more odd program cover choices (Felix Adler on the cover of the 1967 program had passed away seven years earlier) before finally selling the show to Irvin, Israel and the Judge.

What weirder program covers could he have dreamed up had he kept the show longer?

Dude, I just realized that one of mine they printed it the opposite way (facing right)!
Weird!!!!!