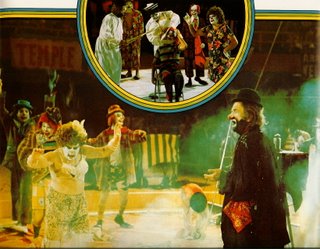 Once Upon a Time In America...great herds of circus clowns roamed the countryside, performing together in groups, in their natural habitat of cotton candy-scented arenas and tents to the amusement and delight of audiences of "Children Of All Ages".

Sadly, those days are gone.

But we have photographs, like this one from the program of Circus America, Paul V. Kaye's massive one-shot at the Capital Centre in Washington, D.C. back in 1974.

The show's Alley boasted Emmett Kelly, the producing clown talents of Alf Landon, Gene Randow and Max Craig and an collection of giants (according to these photos) including Ernie "Blinko" Burch, Chuck Burnes and Albert "Flo" White performing such classics as The Dentist Gag, seen in the top photo.

The clown behind Flo's left hand is Neil Kay, who by the way under his own name is one of the World's Top neuro surgeons. Leaning over in front of Gene Randow pulling up his pants is David Strong.