I have to very sincerely thank my Clown College instructors Tom Dougherty and Jon Weiss and my new friend Mitch Freddes for one of the warmest receptions that I've ever received and one of the best circus experiences that I've ever had.

I left Reading, PA with a heart swelled so full I thought that it would burst out of my chest.

I haven't seen a Ringling arena show since I left the Red Unit in '99 so this was a wonderful homecoming. For all the show's strengths and weaknesses, it really is the direction that I think Ringling should be moving in; talent heavy one ring performances. The show has a personality and feel that a three ring show just can't offer and that is due, in LARGE part, to the efforts of it's comedy stars, Tom, Mitch and Jon.

Their work here is exemplary. The show truly is "world class" and these three deserve a lot of praise:

Tom Dougherty is simply one of the greatest clowns working anywhere, at any time... ever. I thought that he was brilliant when I first saw him at Clown College nine years ago and the work I've seen him do since impresses me more and more. His skill at working with audience volunteers in TRULY improvisational situations is genius. A true "clown's clown".

I haven't seen Mitch Freddes in action since I was a kid and seeing Mitch yesterday put me right back there. Mitch is a clown, pure and simple. With every fiber of his being, Mitch Freddes is a classic American circus clown. He's the kind of clown you don't see enough of anymore and the kind of clown I'd like to be: no "spaghetti", no wasted gesture. Every moment in the arena you know you are watching a very rare, magical and wonderful commodity: a "real clown". The charm, pace and strength of his character remind me of Barry "Grandma" Lubin and an older Charlie Rivel. I hope that, like Mike Naughton, I'll be able to take MY grandchildren to see Mitch perform "down the road".

Jon Weiss has the hardest job of the three. He has the Herculean task of keeping his energy level at full throttle for the better part of three hours. Those of you who've met Jon know that he's completely capable and up to the task but still, maintaining that performance level on a two or three show day is absolutely awe-inspiring. The other thing that makes Jon's job all the more impressive is the amount of dialog he's required to remember. He's got a lovely co-host in Liliana Escobar but it's Jon's personality, character and energy that largely fuel, drive and define the show.

I just wish that the production team would abandon the decision to have Jon and Liliana make conversational announcements during the acts. I really think that it takes the audience out of the moment and greatly diminishes the "live" experience of watching a circus, but that's just MHO.

Tom Dougherty told us on his last day of teaching at Clown College '97, "When we meet again it will be as colleagues...as fellow clowns." Yesterday I got to meet up with three of my most dedicated and passionate colleagues and I thank them for a great time and a great show.

I forgot to bring a camera with me yesterday so here are some photos that my friend Mike Naughton sent me a few weeks back to illustrate the wonderful time that I had in Reading... 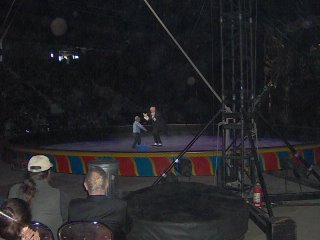 Tom Dougherty welcomes the next generation of circus stars into the ring: Mike Naughton's grandson, Joey. 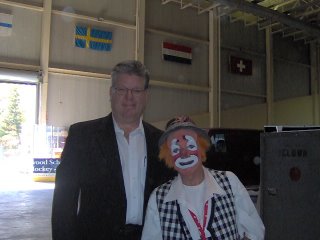 A reunion of members of the Clown College class of 1974, Mike Naughton and Mitch Freddes.

No, Mike is not standing on a box and no, Mitch is not standing in a hole. Mike Naughton, owner of the Yankee Doodle Circus (yankeedoodlecircus.com) stands an astonishing 7' 3" tall! 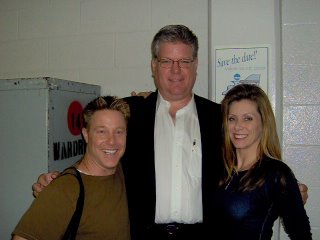 Mike with the "man who holds it all together" and the woman who holds HIM together, Jon Weiss and his radiantly beautiful wife who hasn't aged a day in the last nine years, Laura Weiss.

I hope to see you all again in Binghamton!

HA HA HA
Pat, I'm only 6' 3"! I have two younger brothers but I am the smallest.
We had a blast visiting the Gold Unit a few weeks ago in Lake Placid. I met Tom for the first time and it was great seeing Jon and Laura again. Many years when the Weiss' were on hiatus from Ringling they did a couple of corporate dates for me; they were thoroughly professional and delightful to work with. Since Jon has been on the Amazing Race, I've been hooked on that TV show. To show you what a small world this is: my brother Joseph does work for the Miss America Pageant and knows KANDACE, the current Miss New York who is competing on the current Amazing Race.
Our grandson, Joey, made a new friend with Mitch's little girl, Elizabeth.
Life flies by.