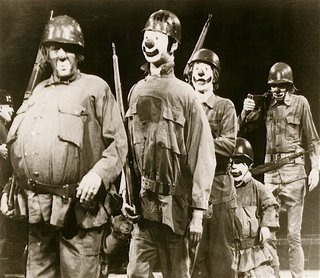 One of Paul Jung's greatest successes as a Producing Clown was his Army Gag, a fixture of postwar American circus clowning both on Ringling (where Jung himself did it) and on other shows (where others adapted it).

I'm not sure who the tramp in the front of the photo is or who is about to have his paper-mache head knocked off (this head was displayed, unlabeled and unidentified in the Ringling Museum of the Circus in Sarasota when I visited there in 1997) in position number two but they are followed by Jung himself, Prince Paul Albert and Gene Lewis. If you look to the left I believe that is Dennis Stevens in the distance.

The gag was performed to great acclaim for about 20 years (1945-1965) but died out due to two unfortunate factors, Jung's untimely death in 1965 and the Vietnam War.

It's unlikely that it would be revived anywhere but Ringling today since no American shows currently tour with a large enough and/or capable enough Alley.

I believe Irvin Feld put an official moratorium on the gag when he purchased the Ringling circus, one that has held throughout the Feld "stewardship" of that show. I don't see any reason for the moratorium to continue today as support for our troops here at home is almost universally unquestioned and the characters don't necessarily HAVE to be soldiers. They could be Boy Scouts, Girl Scouts, police, firemen, ushers, security guards, life guards, janitors, circus ring crew or just about anything.

Change the Army fatigues for Boy Scout uniforms, the guns for shovels and 90% of the gag could be done with no objection or controversy tomorrow.

Please, explain the Gag! I've seen this picture before, but the act was long gone by the time I got into clowning.

Maybe Pat can download the footage of this gag onto the site. Since it was done for so long on the show, it's one of the few gags (along with Lou Jacob's car and Otto & Freddie boxing) that has been preserved on film many times over. A fairly complete version is on the Feld produced "Greatest Clown Acts of All Time" video. Far from being complete by any means, it at the very least took the mostly 16mm and 8mm circus fan film and professionally transfered it to a safer medium. There is a wealth of vintage (pre-1970) clown film at the Circus World Museum library, but again, the majority is brief,incomplete clips.

Also, the knock-off head was worn at times by Alvin Swartize (sp?)

We did the gag at the Rochester, NY Damascus Shrine Circus around February of 1980. Jimmy Douglas was the producing clown. The alley included Mike Naughton, Bobby Davis, Buck Nolan, Vern Woerner, Middy Streeter, Roy Arrington, another acrobat cum clown and myself. The gag wasn't so funny, but we sure had a great time doing it. We would stuff Bobby Davis into the barrel, beat the hell out of him with the ramrod, then the bang would go off and we would release a flyaway dummy. On the Ringling gag, I believe Frankie Saluto would be suspended from the rafters and the spotlight would pick him up there and the audience would think it was Prince Paul after being shot out of the cannon. I produced the gag on Beatty-Cole in the late 80's with a big alley, which included Mike Snider, Larry Armstrong, Buck Nolan, Little Dave and Jerry Nye. Little Dave was the general, and Jerry was in the knock-off head. INstead of a flyaway dummy, I rigged the cannon so that after we stuffed the obnoxious general inside, the barrel would flip over 180 degrees and shoot us all in the ass. The general's clothes would fly out and the general came out in tattered long johns. We did a Buckingham Guards costuming and had great original music for the gag. We followed thge human cannonball, so the spoof worked great.