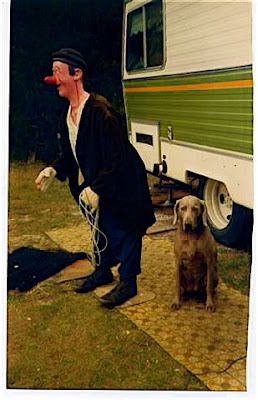 Mark sent this from somewhere on the road to us in 1983. He was on his way out to California to work.

His dog Bingo and he were always together. Mark would always share half of his food with his dog, no matter where he was, and what the food was, Bingo always received a little snack. Mark used to carry tons of food for Bingo wrapped in a napkin in his pocket wherever he went. Bingo was a slobbering, wonderful dog.

When asked about the life-sized Bumpsy Anthony statue that Bingo was standing next to in the photo...

He was best friends with Mark, and had been a clown for his whole life, including Ringling Bros., Barnum & Bailey, and a whole lot of other shows.

Bumpsy passed away in Florida on a beach some time ago in his trailer with his loving wife by his side.

Mark talked about him all the time, and the gag of pulling a length of rope around the arena which he did in a very funny way. He had a very long, stretched out looking neck and often times looked like a turtle. He was given his name "Bumpsy", from other clowns in Clown Alley, because he was always bumping into things and people, and walked with a bumpity kind of style.

A talented man, Bumpsy was one of Mark's very favorite clowns.

That full figure of Bumspsey is on display in the International Clown Hall of Fame in West Allis, WI.