THE SINGLE GREATEST PIECE OF NEWS IN HISTORY!

THE FLAMING IDIOTS ARE BACK
AND ARE RETURNING TO THE NEW VIC!!!

I have just been informed that the Flaming Idiots are back from the dead and Pyro, Gyro and Walter are returning to Broadway and the New Victory Theater this Christmas season! 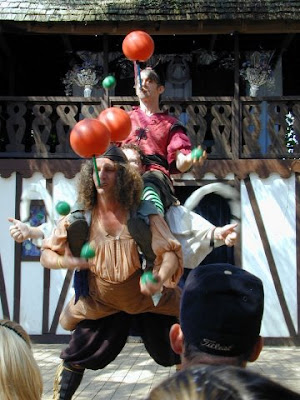 The Flaming Idiots were a comedy juggling troupe of three performers: Jon O'Connor, Rob Williams and Kevin Hunt. Their stage names were Pyro, Gyro, and Walter. They began their act as a busking routine in the early 1980s in Dallas and they performed their last show at the New Victory Theater on Broadway in New York City in 2004. The Flaming Idiots created and produced their show as well as performing it.
They gained early popularity by street performing and developing an act that traveled the Renaissance Faire circuit. Beginning in 2000 and ending in 2004, they performed the show at Zachary Scott Theater in Austin, Texas, replacing the renaissance-related theme of their show with a vaudeville theme. They used the vaudeville theme in their traveling show on Broadway as well.

The Flaming Idiots performed on Comic Strip Live, Sunday Comics, The Today Show, The Tonight Show and others, but Hunt says, "We always preferred to perform onstage with a live audience."

Rob Williams introduced himself as "Gyro" and often acted as emcee of the troupe as well as a performer. Kevin Hunt's stage character of "Walter" was taciturn and deadpan, while O'Connor's character of "Pyro" was a zany and unhinged character.

They performed a wide variety of tricks, but their act was based primarily on juggling and object manipulation and was heavily accented with comedy. Signature routines included the three men juggling five beanbag chairs, Williams' whip-cracking tricks, a sword-swallowing act from Hunt that was modified using a four-foot long animal balloon, a triple escape from intertwined straitjackets, and a three-man acrobatic trick they called Chicken Fight. They also juggled flaming torches and knives and were expert at pin passing. They used some audience participation in shows. Williams performed a routine involving making a bologna sandwich, entirely with his feet and handing it to an audience member to eat, which he performed on The Tonight Show, and for which he is in The Guinness Book of World Records.

The act routinely received high critical praise from arts critics in numerous newspapers. They claim to have performed in five countries: "The United States, Canada, Mexico, England, and Texas."

The troupe published a DVD titled "The Flaming Idiots: Their Very, Very, Very, Very Last Show Ever!" The DVD was distributed through Madam Mogul Productions and is out of print.

Since the act disbanded, Rob Williams (www.robsho.com) has continued to perform worldwide as a solo variety artist, television writer, stand up comic, and has made theatrical forays, including the role of the elf in David Sedaris' The Santaland Diaries, performed in 2004 at Zachary Scott theater in Austin, Texas.

The Flaming Idiots are currently performing a reunion tour. Their first stop was The Moisture Festival in Seattle, next will be the Edmonton Street Performers Festival, then it's back to Broadway at The New Victory, and finishing with a run in Austin, TX at Zach Scott.