Photo courtesy of Robin Estes, from the Estate of Harold Ronk 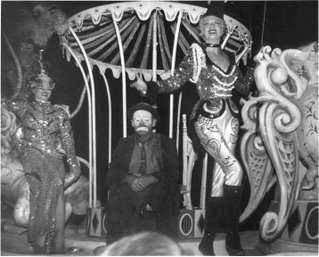 Emmett Kelly and Ann ( I don't know if Ann is the woman on the left or the right. All we know is that one of them is named Ann) riding a float during the 1951 spec.

Bill Hall and Dom Yodice were kind enough to identify Anne Mace as the woman on the right. Dom also notes that they are not on a 1951 float. This is the "Payoff" float from the 1954 spec "Dreamland".

Anne Mace is on right. A pretty blonde, statuesque showgirl, she also worked aloft with the "North Starlets" & was with RBBB in the early 1950s. -- Bill Hall