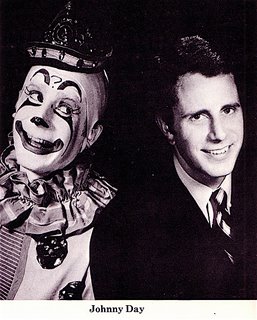 Bill Strong answered a longtime question of mine when he sent this photo of Johnny Day. I'd seen a picture of Johnny a few years ago and wondered if it was Harry Dann or one of his numerous imitators but no one seemed to know anything about a clown with a Harry Dann-like makeup with a question mark in the center of his forehead.

Seems Mr. Day combined the makeup of Harry Dann with the sparkled nose and center-of-the-forehead insignia of Ernie Burch's "Blinko" makeup with Albert White's eyebrows thrown in for good measure. Eddie Dullam also used puncuation in his makeup: an exclamation mark in the center of his forehead. Eddie's makeup was an exaggerated adaption, but not an outright duplication, of Harry Dann's classic face.

So much for all that malarky you read about clown's never duplicating one another's makeup...