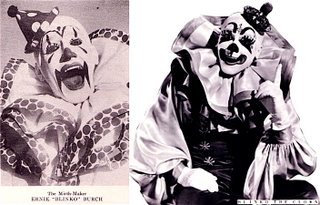 A side-by-side comparison of an early makeup by Ernie Burch and his classic Blinko makeup.

The weird thing is that Ernie always claimed that his nickname "Blinko" was given to him by Cecil B. DeMille during the filming of THE GREATEST SHOW ON EARTH.

Either this is an old photo that was re-used in a program after Ernie had adopted the monniker or the nickname pre-dates Ernie' s appearance in the film.

Either way, by my latest estimate, Ernie Burch must have gone through just under 6,500 different makeups before finally settling on the face he's best remembered for.