Otto in the Seats

Photo courtesy of Robin Estes, from the Estate of Harold Ronk 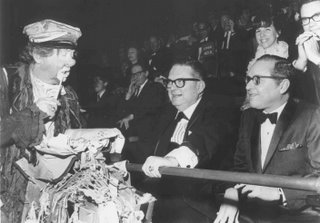 Otto meets the new bosses; Judge Roy Hofheinz seems to be reasonably amused by Otto Griebling, one the greatest circus clowns of the 20th century. Irvin Feld looks slightly uncomfortable. Maybe the Judge was laughing so hard he spilled some of his Dr. Pepper on him.

Well dressed crowd though, all the dads in slick looking 60s narrow-lapelled suits and skinny ties. From everyone's thick black eyeglass frames I would have to guess that this picture was taken on "NASA Night" and the show was playing at Cape Canaveral to celebrate the impending moon landing.

Or maybe it was "Buddy Holly Look-A-Like Night" at the Garden?