At it's peak, the Detroit Shrine Circus ran for 17 days and paid it's clown alley better than any other Shrine date in the country. As a result they had their choice of the best circus clowns in the country... 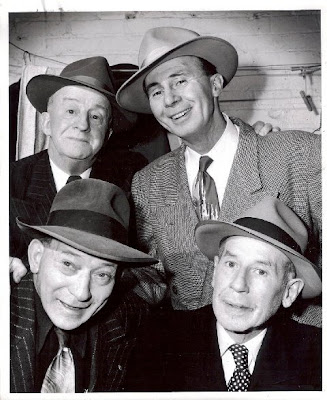 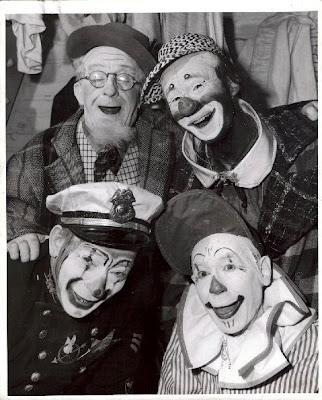 Everett Hart, Paul Jerome, Jo Jo Lewis and Charlie Bell...
and this was only PART of the Alley!

(I'm sure that there were Shrine clowns in Detroit at the time, but back then producers had some pride in the shows that they produced and only used the very best of the volunteer clowns to fill out the larger ring gags) 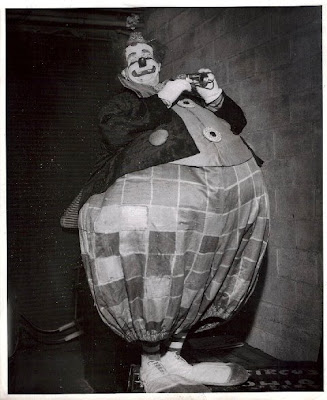 Greg--
I wonder when the Shrine started their Clown Units.
There were just a couple of Shrine Clowns on the dates in the early 70's and believe me that none of them would even think about working in the show. They were very respectful, pleasant people who were just so content to do the "meet and greet". They never stepped on anyone's toes, thereby there was no competition between the "pro's" and the Shrine Clowns.
I was there (very new to the business) and these are my own personal thoughts.

That's who I thought that it was but Greg says that the photo IDs him as Everett Hart.

It looks like it may have been taken just past Shorty's time.

In those days,(Orrin Davinport Producing), & up through the 1960's,(Al Dobritch ,& L.N. Fleckles Producing), Detroit used 30 to 35 Professional Clowns. Then another producer came along and,(as rumor has it), cut the budget by $40,000 to get the date. I personally believe that the same producer made a deal,(use my show & your clowns can do the gags).

To my knowledge the Hadi Temple Funsters, in Evansville, have always done the gags, but brought in a Professional Producing Clown. The 1st time I worked the date,(1956), Jimmy Douglas produced the gags.

Thank you for these wonderful photos (and a heckuva lot of others too). The photo of Felix says to me, a longtime member of the Felix Adler tent, you don't have to do anything, just walk around looking fabulous and make us feel good.