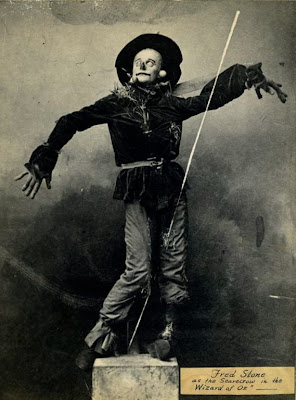 Fred Andrew Stone (August 19, 1873 – March 6, 1959) was an American actor. Stone began his career as a performer in circuses and minstrel shows, he went on to act on vaudeville, and became a star on Broadway.

He was particularly famous for appearing opposite David C. Montgomery, a 22-year partnership, in shows such as The Wizard of Oz premiering in 1902, and the Victor Herbert operetta The Red Mill in 1906. In 1939, he appeared in a radio program promoting the new MGM film of The Wizard of Oz, in which he got to meet the actor who played the Scarecrow, Ray Bolger, who was a great admirer of Stone's work, and although Bolger was too young to have seen Stone play the Scarecrow in the stage play, he did see Stone in The Red Mill.

His feature film career began in comedy westerns, his first The Goat, was filmed in 1918. He starred in 19 feature films.

Stone received an honorary degree from Rollins College, a small liberal arts college located in Winter Park, Florida, in 1939. At this time a small theatre was named in his honor. The original Fred Stone Theatre—a smaller flexible space sitting adjacent to the College's larger principal venue, the Annie Russell Theatre, named after another great American Actor and benefactor—was a wooden bungalow that was razed in the early 1970s. A nearby wood and brick-faced Greek revival styled hall, converted into a 90-seat black-box performance space, was re-dedicated as The Fred Stone Theatre during this period, and although it has been moved to another location on campus, it still stands and is active as a performance venue for smaller experimental productions as well as student directed and choreographed works.

The Rollins Archives have extensive information on the career of Stone, including numerous photographs.

He is buried in Forest Lawn - Hollywood Hills Cemetery.

And he was Will Rogers professional advisor and best friend.

The Red Mill in French is "Moulin Rouge".

This is a nice little video of the spectacle at the Moulin Rouge - with a small part of their circus themed production number.


Here is a parody of the famed night spot, presenting MOULIN HUGE---