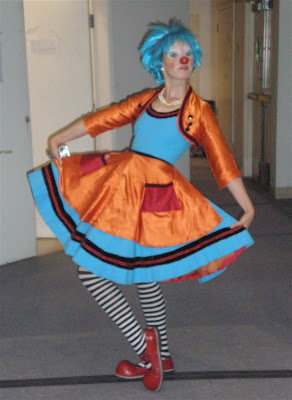 More breaking circus clown news out of Hugo, OK: Culpepper & Merriweather has just announced that they have secured the services of Ms. Jessi Hoffschildt for the 2009 season.

Ryan and Steve on Kelly-Miller, Jesse on Culpepper & Merriweather... Hugo clowning is comin' on strong this year! It makes me wish that I had good clowning news to report from the Carson & Barnes winter quarters.
I don't.

I don't think that I ever will.

Is it going to require the C & B outfit to hire a Ringling product for their alley to satisfy your tastes? I assure you, there are other excellent options as well.

I have it on very, very good authority that the cookhouse on Culpepper-Meriweather is excellent.
Seriously, I have never seen the show but I have heard very nice comments about the operation from folks who have toured with it.
This is an excellent opportunity for a new to the business but serious about their art circus clown to hone their skills and perfect their craft.

Best wishes to Jessi --
the most important thing --
"get the laugh"

don't worry i will! Got to make you darling boys proud of me after all....;) (that was for you mr. cashin)

Have fun...and let me know if the show is going to get in my area!
Tell Trey...and the Dykes family...and advance clown Tina Bausch (who went to Clown College with me in '85) I said "Hello"!
"Toto"

Bravo to Jessi for finding the gig and taking it. Mud show life is not easy, but the things you will learn and the times you will have are going to be great assets to the show and to you personally.

And for what it's worth, Jessi clowned on the Ringling show, but wasn't trained under the Clown College tenure. At the Clown Reunion in September, you'd never find a harder worker or nicer person.

Culpepper has always been a great show, with outstanding people, and Jesse, will fit in real well.

Pat, Iam a good friend of Andy Scharff, I met you at the bar in Baraboo, last fall. Trying to book some dates in Jersey. Any help. Dan
dgabert@att.net