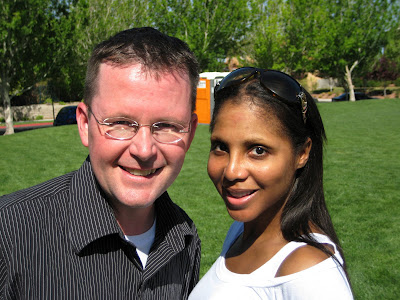 I performed for Toni Braxton at her sons 5th birthday party this
afternoon. Toni was recently on Larry King speaking about her son and
his autism.

Let me just tell you all that Toni Braxton is absolutely one of the
nicest and kindest people that I have ever met.

I really had no idea who she was, just that she was a successful
recording artist that has been performing at the Flamingo Hilton in
Las Vegas for the past few years.

I went to the gig, and moments after meeting her I told her that my
daughter had recently turned 5 and what a great age it is. Her face
lit up and she said "Did you bring her?". I answered "Well, heavens
no!" and she immediately said "Please call your wife and daughter and
have them come over. I would love to have them here for the party".

I was stunned! (Of course I didn't have them over... but the offer
was extremely nice and very, very sincere).

Toni Braxton has sold over 40 million albums, and her number-one
hit "Un-Break My Heart" is the second biggest single by a female
artist ever.

Just wanted to share about meeting a truly kind and down to earth
mega-star.

Isn't she soooooo sweet. I love all her albums she is a quiet success.