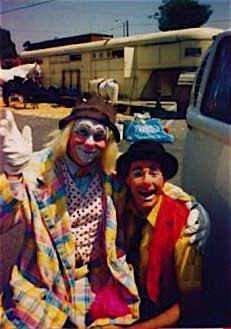 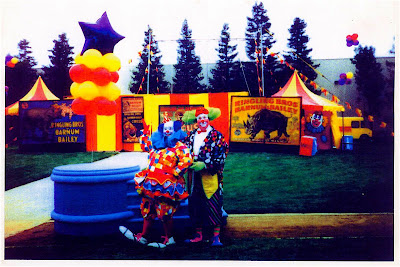 This was from the LA Circus, on the Universal Studios' lot in 1997-1998...performing during the El Nino (winds of up to 85 mph and with drenching rains were commonplace and some days downright dangerous) But we got through it and lived to tell about it. 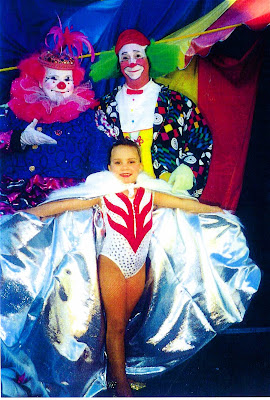 Other clowns who also appeared in the show were: Jeffrey Taub, Grainger Esch, Carlos Ragas, Sheri Sicard, and a couple of others, whose names escape me right now. It was a great gig, being that it was only 4 minutes from our house and fun to be on City Walk.

Hi Pat,
You don't know me but, I worked with Kevin at Canobie Lake Park in Salem, NH several years ago. My name is Stan Jackson, (a/k/a Mr. Silly)I was the Park's Audio Engineer. If you could do me a favor and forward this to Robin and Kevin I would really appreciate it. My e-mail is stanleyvox@aol.com. I'd love to catch up with Kevin and talk live. Love the site, I'm a clown at heart. Some of my fondest memories were working with Kevin on stage, sharing some great stories and meals together with Kevin and Matt Lewis (the Elvis tribute show) Please forward this to them, if you can. I would be indebted to you Thanks, in advance, for your help. Please feel free to drop me a line if you or any noteworthy "clown shows" come to the Boston area. I really enjoy watching professionals work their craft in a live performance.
Thank You,
Stanley Jackson